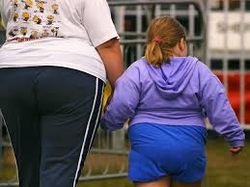 Obesity is defined as having an excessive amount of body fat that presents a risk to an individuals health. Being obese increases your risk of chronic conditions and diseases such as heart disease, diabetes and high blood pressure.

Obesity is one of the leading preventable causes of death worldwide.

At an individual level, a combination of excessive food energy intake (calories in) and a lack of physical activity (calories out) can explain most cases of obesity. Increasing rates of obesity at a societal level are due to easily accessible processed foods, "food like product" diets, as well as a decrease in physical activity.

A sedentary lifestyle plays a significant role in obesity. Worldwide there has been a large shift towards less physically demanding work, which has lead to 30% of the world's population getting insufficient exercise. This is primarily due to an increased use of cars and a greater prevalence of labor-saving technology in the home. In children, there appears to be a decline in levels of physical activity due to less physical education required in schools, a severe lack of nutrition in the food provided by our education system, and an increase in sedentary play such as video games, computers, and television.

In both children and adults, there is an association between television viewing time and obesity rates. A review found 63 of 73 studies (86%) showed an increased rate of childhood obesity with increased media exposure.

The main treatment for obesity consists of changing nutritional habits and physical exercise. Restrictive diet programs may produce weight loss over the short term but maintaining this weight loss is frequently difficult. The key to loosing and maintaining weight loss is a change in your nutrition, physical activity, and by making a permanent lifestyle change. In order to make these lifestyle changes you must figure out what the root cause of your unhealthy habits are such as comfort eating, lack of knowledge, stress, etc.

At Core Identity, we work on all three plains: mental, physical and nutritional, substantially increasing your chance of weight loss success.